Life in Paris A Fabulous Journey Through History

Like a time travelling machine, architectural styles transport us to the various ages of French art and lifestyles.

The Age of the Cathedrals

You can’t pass by number 3, rue Volta in the Marais without noticing the magnificent timber façade from the Middle Ages. With a low entryway, separating the ground floor businesses, small windows and five low-ceilinged floors reached by a narrow staircase, each detail confirms that this is one of the last medieval houses in Paris. This is a rare architectural style which meant that the building, which is residential, escaped each new demolition plan. It was declared the oldest house in Paris in the early 20th century to save it from works to bring the street up to norms with setback limitations, and deemed to have been built in the 13th century. Research revealed that the building was in fact a perfect reconstruction of a medieval building, and constructed between 1644 and 1655. The oldest house in Paris, authenticated and listed as an historical monument in 2011, is located at 51, rue de Montmorency. It is more than 600 years old and belonged to Nicolas Flamel, an alchemist of reknown who wanted to house the destitute, as attested by the plaque placed above the pediment.

Whether they were authentic medieval houses or more recent imitations, the style of building is recognisable by their exposed beams, stone walls, low ceiling height, small windows and a fireplace used for cooking, with the bedroom as the main room. In the Middle Ages, the bedroom was the biggest room, and served as a living area. It wasn’t until much later it became a private space. The irony of the story is that today, the interior layout of studios harks back to this medieval art de vivre. 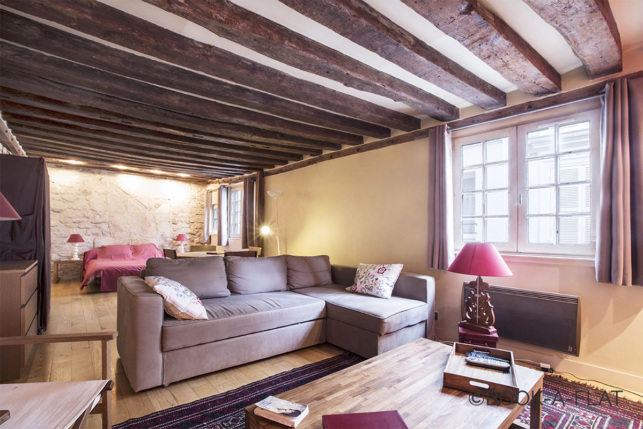 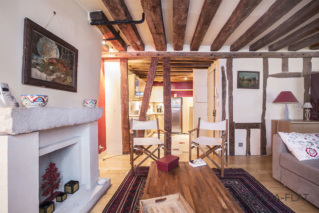 Apartment to rent with exposed beams and fireplace in the Marais 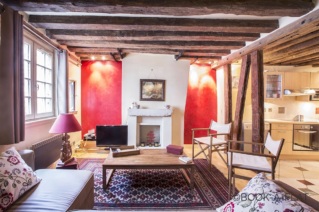 Paris grew more beautiful and expanded under Louis XIII. Seventeenth-century architecture was very different to the Renaissance style. The elegance, finesse and finely carved sculptures were no more. Enter the vast masses, straight lines at right angles and graceless domes of monumental architecture. In these buildings, stone and brick are often used together. The blend of red and white tones, together with the black slate, create a pleasant decorative effect that can still be seen on Place des Vosges. Often, the narrow rooftops and high chimneys add to the picturesque view and lighten the ensemble.
The Île Saint-Louis became gradually more built-up. The architect Marie designed most of the buildings there and the bridge that bears its name. The two biggest buildings, Hôtel Lambert and Hôtel de Bretonvilliers, are still standing at the other end of the island, towards the Pont de Sully bridge. Almost all of the residents were magistrates, advisors to the parliament or the Audit Chamber. Île Saint-Louis has changed little since the 17th century and today it is the calmest area in Paris. While wandering along the Quai d’Orléans and the Quai de Bourbon, you can still admire the same façades. Today, divided into apartments, these former town houses all feature large reception rooms. 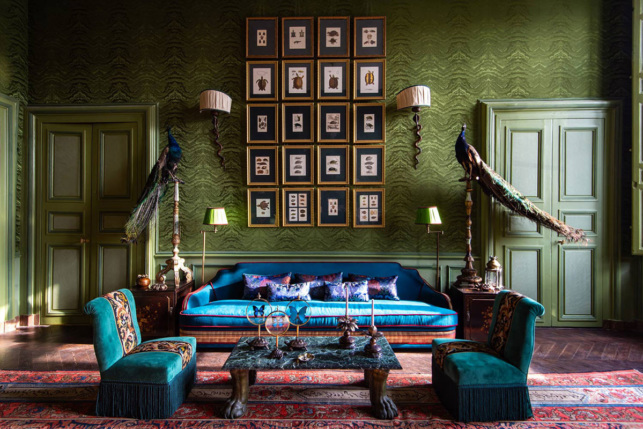 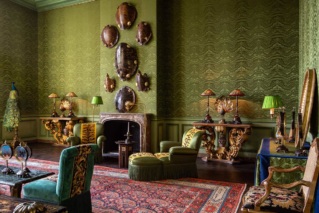 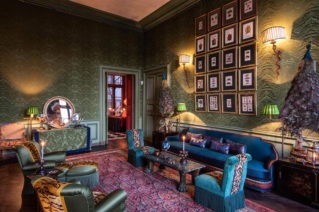 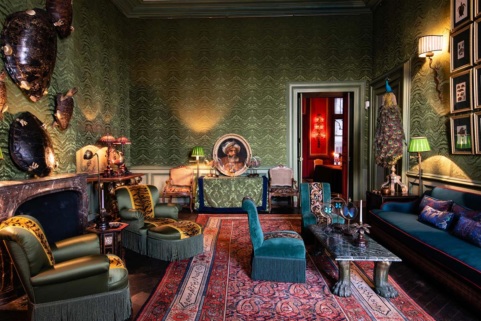 A varied mix of prints and flamboyant carpets 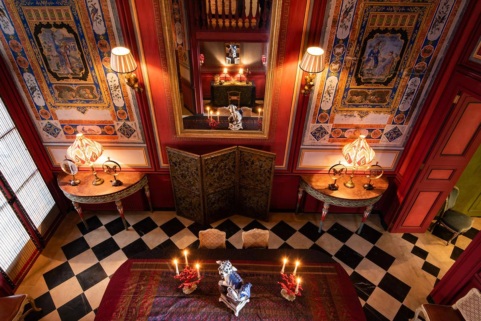 Napoléon reestablished order and conquered Europe. The Emperor moved into the Palais des Tuileries and brought the Rue de Rivoli through it to connect the east to the west. Although he was much more often in the countryside than in Paris, Napoléon gave Paris a new monument with every new victory. In 1806, Paris received the Vendôme Column, erected using the canons taken from the Austrians and the Russians. Next came the Pont d’Austerlitz to link the Arsenal port to the Jardin des Plantes; followed by the Pont d’Iéna; and the two “Arcs de Triomphe” — one at the Carrousel opposite the Louvre, and the other at Etoile, in honour of the Grande Armée. After the Revolution, that brought with it a multitude of architectural influences from Egypt to Louis XVI and ancient Greece, the Empire marked a return to strict rules. Massive, classical-style buildings began to appear, with windows and entryways with semicircular arches; pilasters set into the walls, façades with stringcourses separating the floors; long balconies, generally above the cornice, but also on the piano nobile floor and at the dormer level; frequently, statues appeared in niches between the windows. Then, thanks to Mansart, the garrets became large enough to serve as living spaces. Today, these spaces have been cleverly rehabilitated. The garrets beneath the mansard roofs are joined together to make super apartments with unobstructed views of Paris. 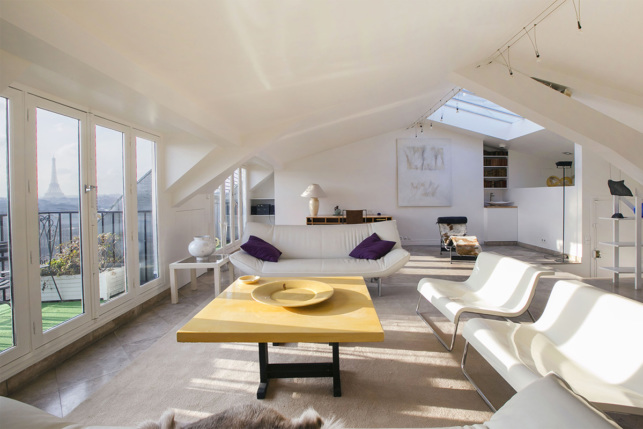 Furnished apartment under the eaves with panoramic view of Paris 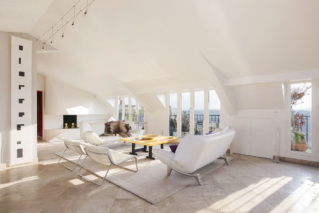 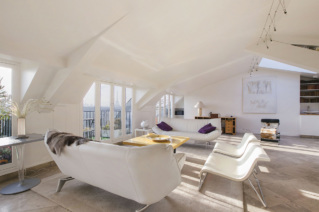 On the 8th floor of this building on Rue de Rivoli, the attic floors have been fabulously refitted 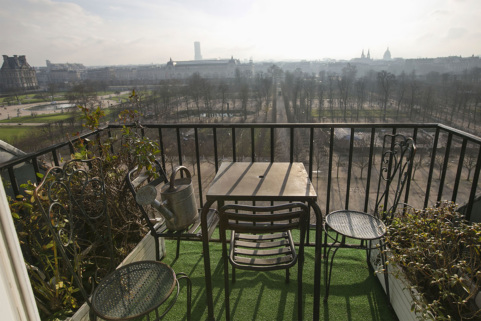 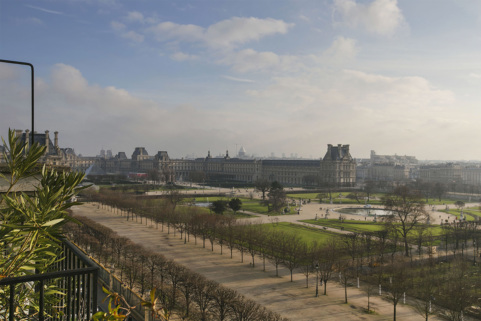 An incredible view of the Louvre

The Renovation of Paris, and the Baron Haussmann era

From 1852 to 1870, Napoleon II — inspired by the recent urban renovation of London — transformed Paris and modernised the French capital for good. He cleaned out and eased the overcrowding in the working-class neighbourhoods and promoted social housing. The project was assigned to Baron Haussmann, who masterfully orchestrated the various actors. Paris became a monumental building site. More than 20,000 buildings were demolished, with certain neighbourhoods such as the western part of Île de la Cité, between the Palais de Justice and Notre Dame cathedral, completely razed. 34,000 buildings were constructed following the same plan: four or five stories (sometimes six beginning in 1859); cut stone façades; a ground floor and mezzanine level indicated by deep striated horizontal grooves; a long balcony on the second floor, supported by brackets (another one or two balconies could be added to other levels); wider spaces between the windows, and lastly, the façades of buildings were now dated and signed by their architect. Running water, and soon after, electricity and gas were provided on every floor. Parisian apartments had entered the modern era. At the time, long corridors separated the toilets and bathrooms from the living areas; today, the interior plans are more open and spaces redesigned to adapt to contemporary lifestyles. 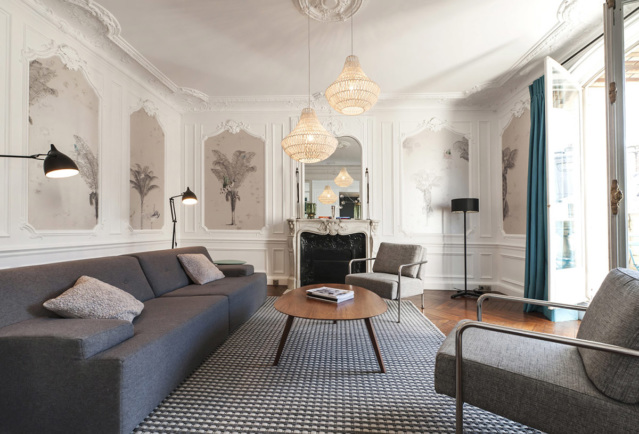 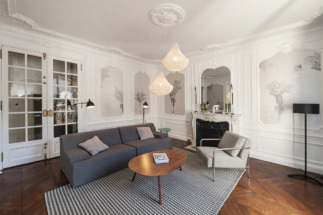 Furnished rental in a 20th century building listed as a historic monument by the city of Paris. This building, known as “La Semeuse”, was designed by Frantz Jourdain, who built the Samaritaine department store two years later 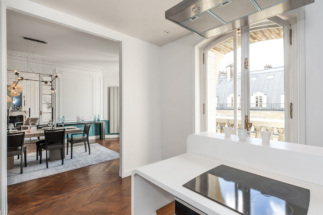 Apartment with a great view of the Louvre 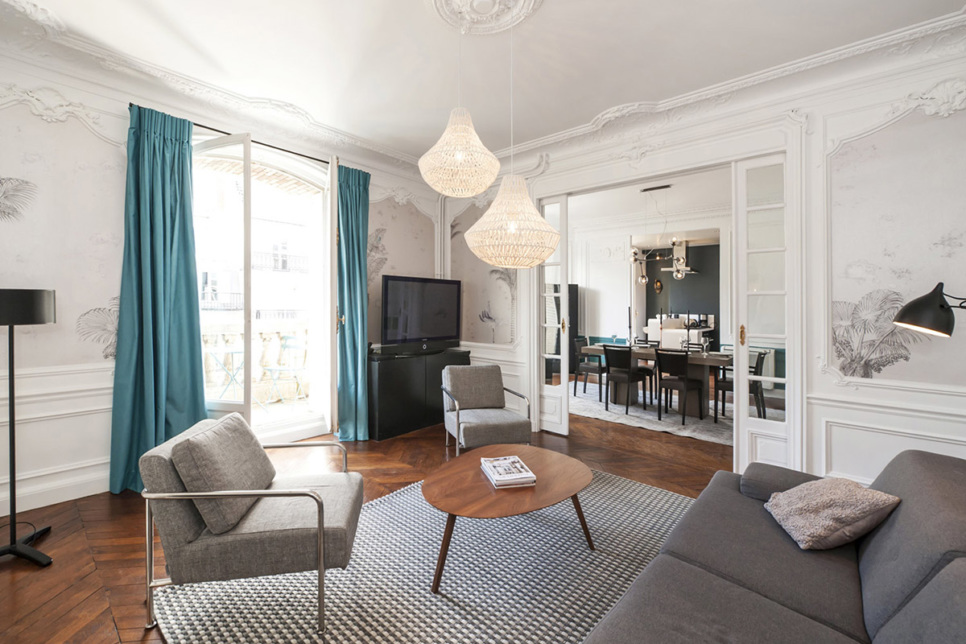 As the 19th-century Haussmanian style gradually faded out, Art Nouveau made its entry in Paris. It was introduced by the architect Hector Guimard, who was greatly impressed by the Hôtel Tassel, the first architectural synthesis of Art Nouveau in Brussels, and the work of Victor Horta. Guimard took liberal inspiration from this revolutionary artistic movement to build the Castel Béranger between 1895 and 1898. The building was a precursor to Art Nouveau in the 16th arrondissement of Paris. This new style was particularly inventive, totally artistic and an expression of a fulfilling personal environment for modern life. Architects were freed from restrictive rules; Art Nouveau is characterised by the presence of curves on façades; numerous ornaments with precise lines and finely wrought decorative elements representing flowers, plants, insects and animals; a blend of often-colourful materials and glazed, wrought iron doors. It broke down the typical layout of rooms in middle-class houses. The entrance was now right in the centre of the façade; the corridor placed on the building’s central axis, and skylights inserted at the centre to flood the building with light. This artistic movement was fleeting, and stopped dead with the First World War. Art Déco took over between 1920 and 1930. Art Déco was more rigourous, and was the sign of a return to classic, stricter architecture, with façades in straight lines, often of reinforced concrete, and sometimes cut stone or brick, combined with minimalist, often geometric decorative elements, which replaced arabesques and twirling shapes.
Curves gradually disappeared, replaced by straight angles and bow windows which appeared on the first floor. Railings, balconies and glazed doors were made of wrought iron. 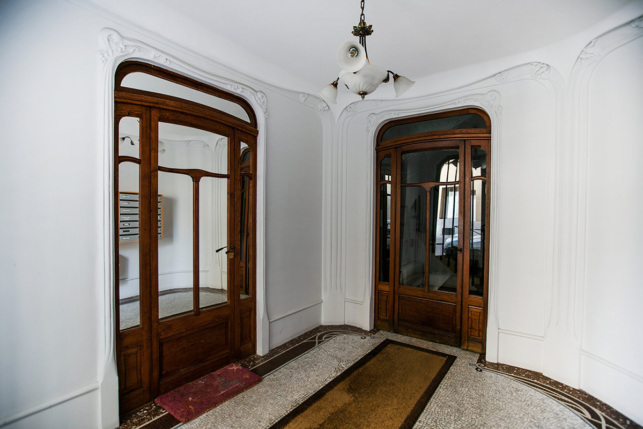 Rue Agar: The communal areas of a building designed by Hector Guimard 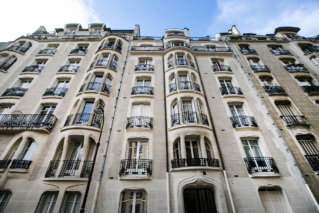 On the façades, we can see wrought iron window sills and balconies, typical of the Guimard style 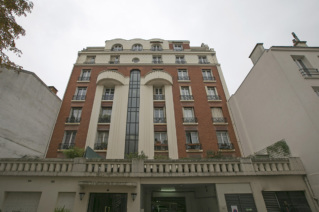 High, vertical building in the Art Déco style, with a striking, monumental appearance and white columns contrasting with the bricks of the façade and the presence of a fish-scale decoration on the pediment