Saint-Germain-des-Prés Quite a history!

The stories of all those who roamed its streets, who loved and fought and rebelled over the centuries still echo within its walls. If you want to hear them, go wherever the wind takes you and follow its maze of alleyways between the Palais du Luxembourg, home of the French Senate, and the River Seine.

FROM THE MIDDLE AGES TO THE FRENCH REVOLUTION

The area gets its name from the Abbey of Saint-Germain, whose Romanesque church — rebuilt after the French Revolution — remains at the very same location chosen in the 5th century by the Merovingian King Childebert I, son of Clovis. The stage for many a key moment in history, it was destroyed a first time during the Norman invasion at the end of the 9th century, then fortified in the 16th, because it was still located outside of Paris. Flourishing in the 18th century, the Abbey was dissolved during the French Revolution, and its monastic buildings turned into warehouses and jails. In 1794, a fire destroyed the Library. The building’s annexes were sold and its land gave way to apartment buildings. The area as it is nowadays was beginning to take shape. Saint-Germain-des-Prés Church, restored during the 19th and 20th centuries, remains the neighbourhood’s emblematic feature.

At the site which is today the Louis-le-Grand high school, the oldest and largest European medieval university once stood, the central hub of all the Parisian colleges on the Left Bank. The Université de Paris educated the greatest minds. Thomas Aquinas, François Villon, Joaquim Du Bellay and Pierre de Ronsart are just some of its most well-known students. During the Enlightenment, Encyclopaedists debated in the Procope, still located 13, rue de l’Ancienne Comédie. To follow in the footsteps of Danton, Marat, Desmoulins or Guillotin, go to Cour du Commerce Saint-André. At number 9, you’ll find the workshop where the guillotine was developed and tested for the very first time. Number 8 was one of the printing houses of L’Ami du Peuple (The People’s Friend), the most influential political newspaper of the French Revolution, which was edited and published by Marat.
Danton’s house, located at number 20, which was destroyed during the roadworks to extend Boulevard Saint-Germain in 1875, was found at the exact location of the Henri Mondor statue.

FROM THE 19TH CENTURY TO MODERN TIMES

Racine, Balzac, George Sand, Musset, Verlaine, Rimbaud and Anatole France — writers, poets and playwrights were staunch patrons of the Saint-Germain-des-Prés cafés. Painters like Delacroix, Ingres and Manet moved there. The area became a special meeting place for the arts scene. To get a feel for the spirit of the time, drop into the Eugène Delacroix museum, 6 rue de Fürstenberg. Set in the artist’s vast workshop with a view of the picture-perfect garden, it is attached to an apartment located on the second floor where the painter moved to be closer to Saint-Sulpice church and Saint-Anges chapel, sites he had been commissioned to paint. Conserved and restored to their original state, these locations offer a living testimony of the mid-19th-century French art de vivre. 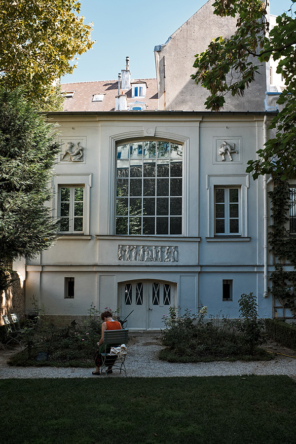 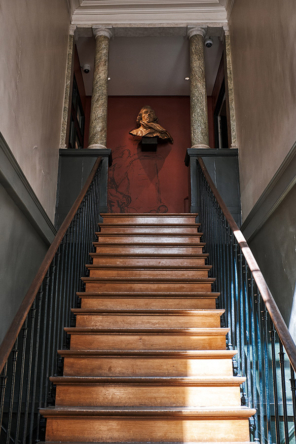 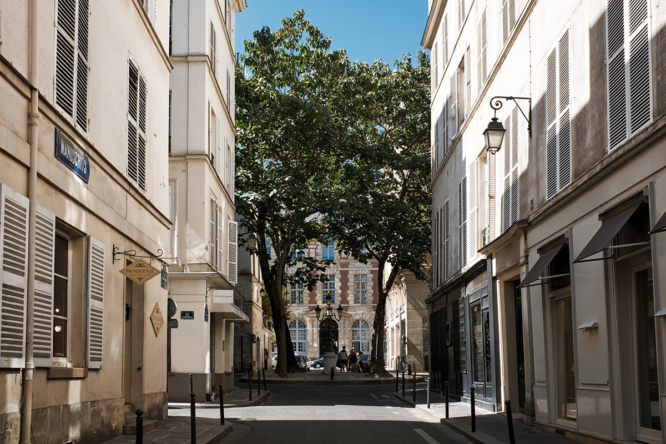 Further north, on the banks of the River Seine, stop by the Institute de France, which was built by Mazarin to house a college. It was closed during the French Revolution, then reopened in 1806 by Napoleon to group together the five Academies (Académie Française, Académie des Inscriptions et Belles-Lettres, Académie des Sciences, Académie des Beaux Arts and Académie des Sciences Morales et Politiques) under its prestigious dome. Opposite its entrance, the elegant Pont des Arts bridge spans the River Seine to the right bank. Nowadays, lovers from all around the world meet there to vow eternal love, symbolised by hanging a padlock there.

From the beginning of the 20th century, this area became the refuge and space of freedom for the international art scene. During WWII, in spite of the imposed curfew, Saint-Germain-des-Prés cafés remained open. Jean-Paul Sartre and Simone de Beauvoir made Café de Flore their hideout — “There are less Fritzes here than at the Dôme (in Montparnasse)” the young philosophy graduate declared. More rustic, the Café de Flore was not popular among the Wehrmacht officers. Dimly lit by acetylene lamps, the café became the workplace of future major authors. Sartre wrote The Roads to Freedom there, most of Being and Nothingness and his play The Flies which was controversial during the Liberation, while Simone de Beauvoir wrote All Men Are Mortal at its tables. 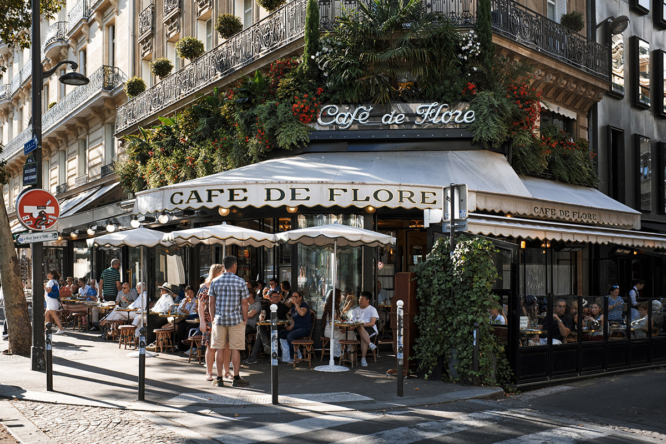 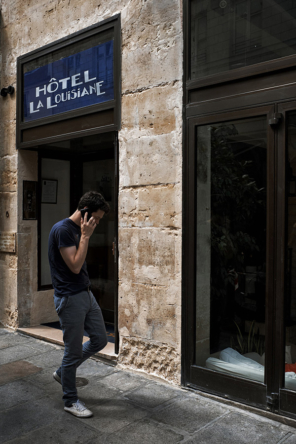 Sartre and de Beauvoir lived in separate furnished studios in the same hotel, like most writers and artists in the neighbourhood. Many of them then moved to La Louisiane hotel, rue de Seine. Juliette Greco, a singer and symbol of Saint-Germain-des-Prés, lived there in May 1948, and had a passionate love affair with the famous trumpeter Miles Davis, who composed the music for the Louis Malle film Elevator to the Gallows.
The creative effervescence in the neighbourhood attracted many artists, painters, sculptors, performers and designers. La Louisiane became a special meeting place for Salvador Dali and Amanda Lear, Bernard Buffet, Alberto Giacometti, Vassilakis Takis, Dennis Oppenheim, Nam Jun Paik, Joseph Beuys, Keith Haring and many more. Many of them are no longer here today, but their tradition lives on. Film directors Bertrand Tavernier, Léos Carax, Jane Campion, Quentin Tarantino are patrons of La Louisiane. The tiny family hotel keeps inviting modern creators to show their works of art, and welcomes editors of cultural content and cyber-entrepreneurs. It boasts 80 charming bedrooms in the heart of Saint-Germain-des-Prés.