Montorgueil The Belly of Paris

Montorgueil. With a name that means “Mount Pride” in French, you might imagine that the area has a natural tendency for complacency, and a sentiment of superiority over the rest! However, the irony of the story is that it was not given this name to affirm its excessive self-esteem, but rather with a hint of sarcasm.

In the Middle Ages, Parisians piled up their rubbish at the foot of the ramparts built by Charles V. Rue Montorgueil was chosen as the site for an open air rubbish tip. A mound of detritus, garbage, street sludge, rubble and other waste gradually covered the ground, forming a hill, which was ironically nicknamed Mons Superbus, and then Mont-Orgueil.

Since the 13th century, the street was named for Mont Orgueilleux, to which it led. This was also the place where fishing hauls, specifically oysters, were delivered from the northern ports of France. The fish market was located just next to it, where Rue Etienne Marcel now stands. Meat, poultry, wheat, fruit and vegetables: all kinds of food were sold at the gates of Paris. Today, only the street names keep the memory of the trades once practiced alive. Rue des Prêcheurs (preachers), rue au Ours (corruption of the name “Rue aux Oies”, or geese street), rue de la Cossonnerie (poultry and game market in the Middle Ages) and the Rue de la Verrerie (glassware), Rue de la Ferronnerie (ironware) and Rue des Lombards (pawnbrokers and bankers).
At no.6, rue de la Ferronnerie, there is a commemorative plaque on the ground in memory of the assassination, on 14 May 1610, of Henry IV by Ravaillac.

THE MOST AMAZING URBAN FOODSTORE

For the next eight centuries, the neighbourhood became the belly of Paris. It fed the capital and the country. Wholesalers and retail merchants sold every type of food or kitchen item.

The first covered markets were built in 1137 by Louis VI. In 1269, Louis IX added three new markets, two for drapers and the third for haberdashers (merchants) and leather curriers. From the 16th century onwards, the markets were reorganized. Under Frances I, the first markets were demolished and rebuilt as individual houses, often with porticos and covered galleries on the ground floor that were known as the “piliers des Halles”. In the centre of these arcades, you could find the “carreau” or diamond, a market selling bread, butter, cheese and eggs. In the 18th century, the wheat market was built on the site of the old corn exchange. The Cimetière des Innocents, which collapsed, leaving the bones to be transferred to the catacombs, was refurbished as a flowers, fruit and vegetable market, which doubled the market’s size.

In 1870, the markets were streamlined and modernised. Ten new pavilions were designed by Victor Baltard and Felix Callet to replace the diamond of la Halle, fruit market and sheet and cloth market. The streets Rue de la Tonnellerie, de la Fromagerie, du Marché-aux-Poirées, de la Cordonnerie, de la Petite-Friperie, de la Grande-Friperie, Jean-de-Bauce, du Contrat-Social and the Place du Légat square also disappeared. A century later, the neighbourhood was once more threatened with paralysis. Les Halles had to move or be gone forever. The markets moved out of the centre of Paris. The move of the century took place between 27 February and 1 March, 1969. More than 5,000 tonnes of goods, 1,500 trucks and 20,000 people moved to Rungis and La Villette.
The neighbourhood was transformed, with new urban planning, an RER train station and a gigantic trade and leisure forum inaugurated in 1979. It was no longer the belly of Paris — it was now its heart.

Nonetheless, a few die-hard epicurean streets resisted and remained true to their origins. The tradition lives on. In Rue Montorgueil, the food trade was passed on from generation to generation. At no.38, l’Escargot Montorgueil, which was the favourite dining spot for Sacha Guitry, Marcel Proust and even Salvador Dali, has been feeding Parisians since 1832. 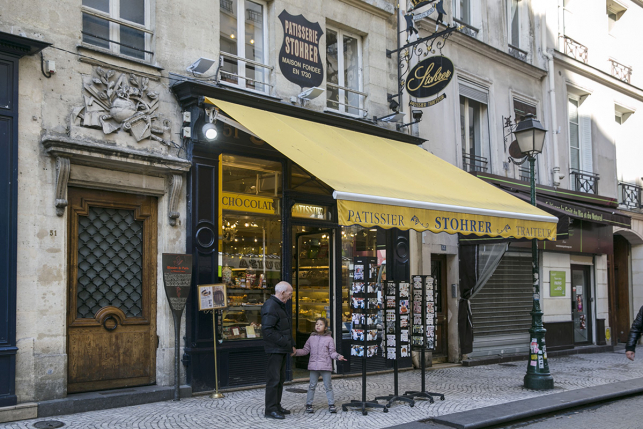 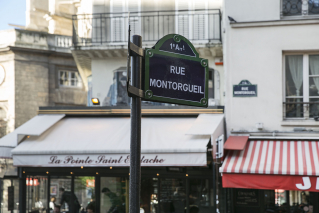 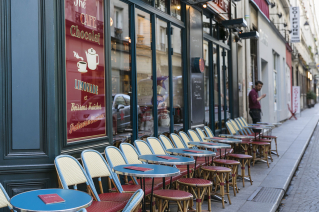 At no.51, you can find the Stohrer bakery and cake shop, the oldest in Paris, founded by King Louis XV’s pastry chef, Nicolas Stohrer, in 1730. Rhum babas (a house invention), puits d’amour, religieuses à l’ancienne, sublime bouchées à la reine….here, you’ll taste the best of France’s old-world cakes while sitting in the sumptuous café designed by Paul Baudry, who designed the interior of the Opéra Garnier.

At no.78, Au Rocher de Cancale opened in 1848 when the street was just a row of catering businesses specialising in oyster sales, and it still offers up tasty seafood fare and fish as well as delicious sweet and savoury creations. Just like many of the street’s buildings, it is a listed historic monument. It is said that Balzac liked to go there, taking inspiration from the clientèle. In fact, the restaurant is cited in many of his works.