The Haussmannian style The little black dress of Parisian property

Elegant, understated and refined, the Haussmannian building, which emerged in the second half of the 19th century, soon became the urbanistic signature of Paris. With its visionary design, it was suited to every new development. Today still, more than a century and a half after they were built, Haussmannian buildings are a sound investment. Just like the little black dress created by Coco Chanel, which was reinterpreted by every major designer, the Haussmannian apartment is the reference in Parisian living. 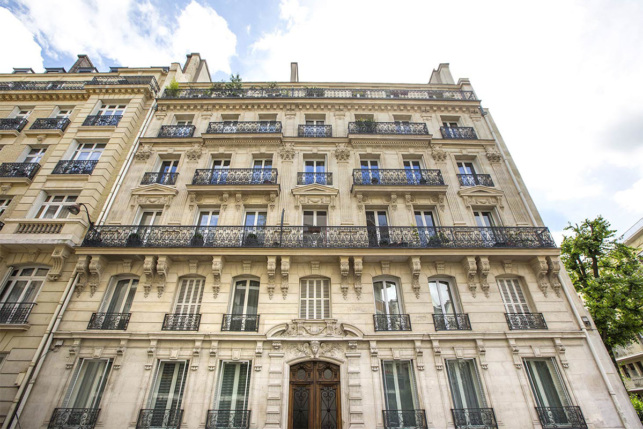 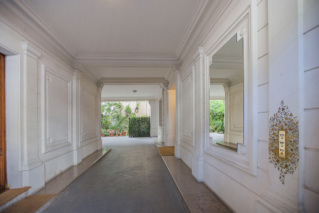 Upon entering the building, the stairway in the entrance hall provides access to the different levels. The standard plan of a Haussmannian building includes an interior courtyard, providing a source of fresh air and natural light 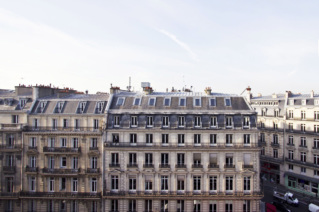 View of the Avenue de l’Opéra. The Haussmannian breakthrough was one of the major projects of the Second Empire in Paris 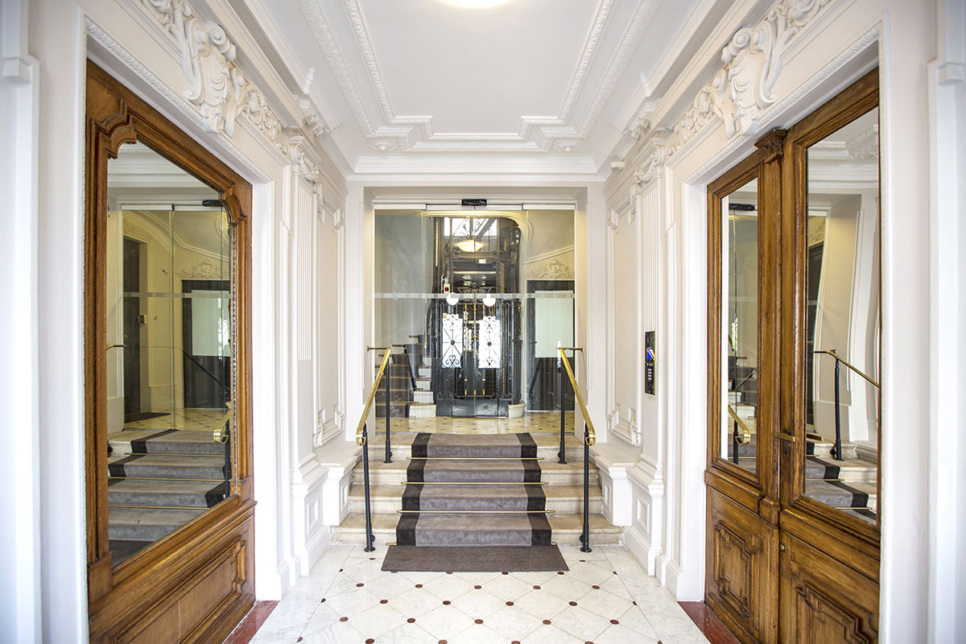 The tall wooden doors of this building entrance open onto a typical Haussmannian-style hallway. The ledges, mouldings and coving form an aesthetic, harmonious ensemble

The new reference in modernity

Between 1853 and 1870, to decorate the 175 kilometres of roads that now sliced through Paris, Baron Haussmann created a resolutely disruptive architectural style. The private townhouses, the last remains of the 18th century, were gone. In their place, investment properties for rent, fostering a more diverse society. Divided into lots, these buildings contained apartments spread out over the five or six floors (depending on the width of the road, buildings varied from 12 to 20 metres in height). Every floor represented a different social class. On the first floor — often referred to as the mezzanine floor — were the merchants, who owned the stores on the ground floor. To respect the façade’s symmetry, the windows are not as high there as on the other floors. Since the entryway is high, the windows just above need to be smaller, to create a balance. Ceiling heights are a maximum of 2.6 metres high, compared to 3.2 metres on the second (“piano nobile”) floor, reserved for the wealthy. Ceilings are lower the higher you climb. The prestigiousness decreases from bottom to top. The third and fourth floors are identical, usually for the middle classes. The fifth floors were set back, usually housing the more modest social classes. The pleasure of the little balcony running along the length of the apartment made up for having to climb to the top of the stairs, and it also embellished the façade. The sixth or top floor is where the “chambres de bonnes” were, for the servants. With lower ceilings and built under the eaves, the only access was by the back stairs. 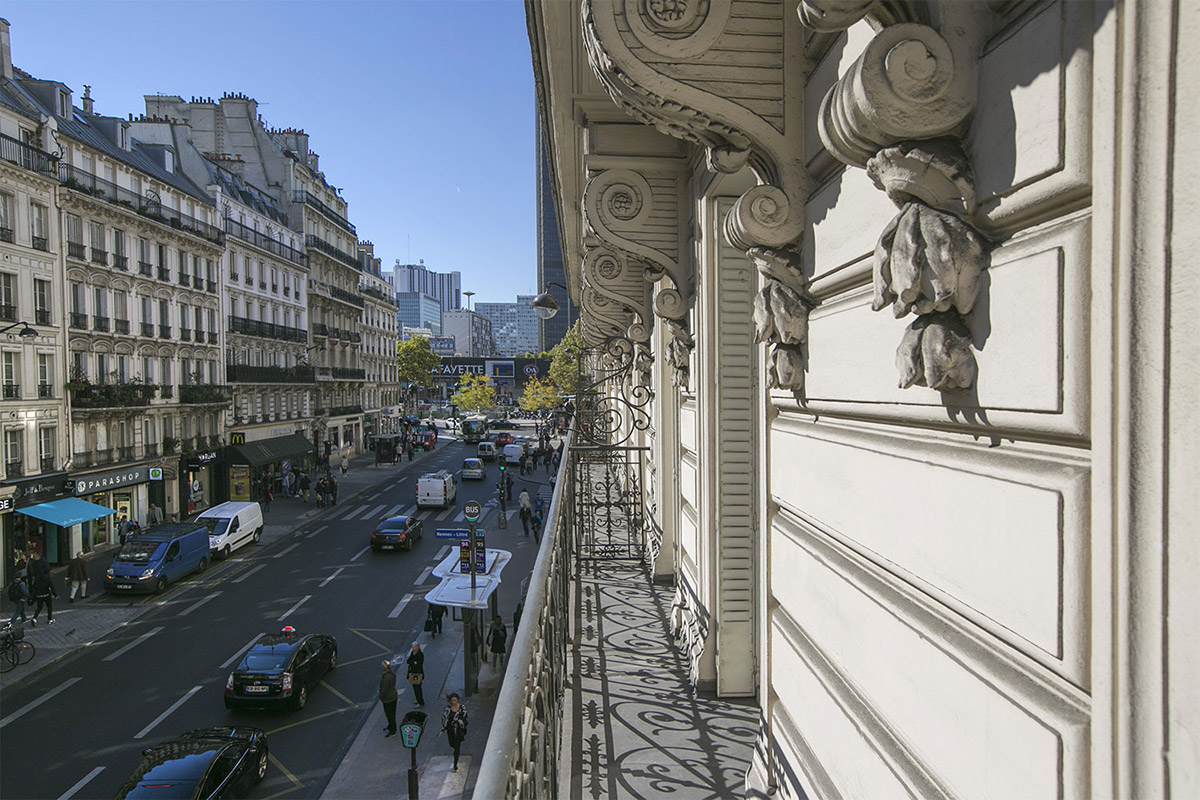 A dramatic, but uniform, façade

Haussmannian façades had a strict design in order to show the social status of each floor, and also so that their perspective was in continuity. The ground floor and the mezzanine level are often marked with deep striated grooves that emphasise the base of the building. Between these grooves, there were “bossages” that were more or less finely detailed, or else columns to add to the decoration. The second floor is the focus point. Wrought iron on the prestigious balcony and railings and richly decorated windowframes were part of the features designed to call attention to the piano nobile.
The ornaments are less visible on the third and fourth floors. The balcony railings on the fifth floor are much less detailed than those on the prestigious balconies.
On the street side, the façades feature cut stone from the quarries of Saint-Maximin in the Oise region or Petit-Montrouge in the 14th arrondissement. On the courtyard side, lesser quality stone was used for the gable walls.

Narrow, dark residences were now a thing of the past. Haussmannian buildings were not very deep (on average between 7 and 13 metres), and had courtyards or small yards, and they often had bright, dual-aspect apartments with big windows. Built in blocks, all attached to each other, these adjoining buildings where there was minimal energy loss were extremely heat efficient. With modern conveniences, the apartments were connected to the sewage system and the water distribution network, equipped with a kitchen, which generally overlooked the courtyard, with shuttered larders. They often opened onto a large entrance gallery that was called the “antechamber”. 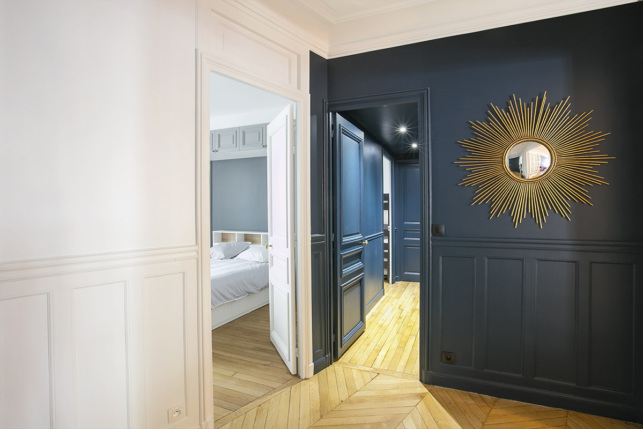 Inside the apartment, the antechamber opens onto the main rooms 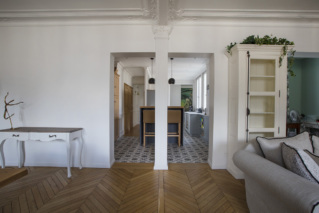 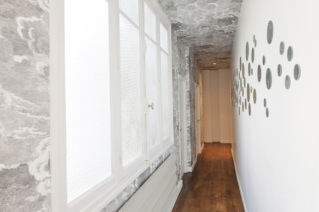 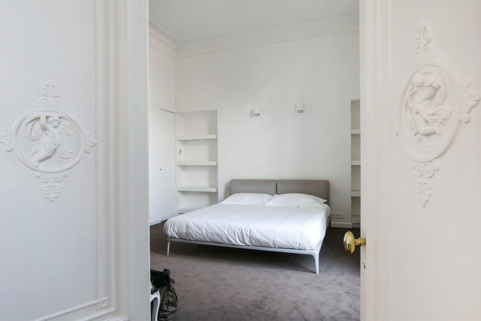 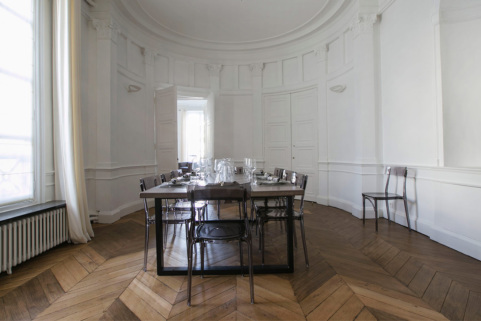 All of the rooms in the apartment are accessed via a long corridor, which are all in a row and look onto the street. The most luxurious apartments also have reception rooms. The kitchen is generally accessed from a back stairway. 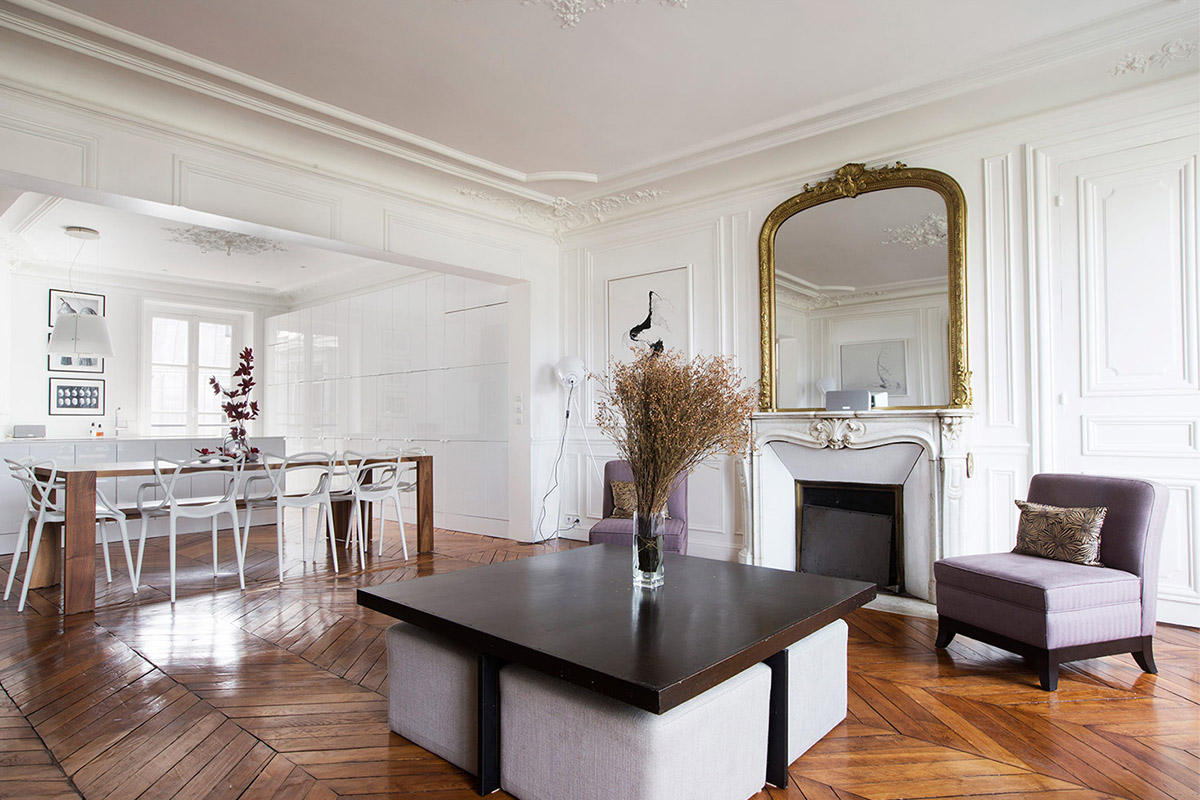 The discreet charm of the bourgeois apartment

Bright rooms, wooden floors, fireplaces and fine mouldings are just some of the attractive features that were so adored by all those who once dreamed of living in a Haussmannian apartment. With the exception of the kitchen and water closets, the floors were all made of wood. With herringbone, brick pattern or “parquet de Versailles” motifs, the wooden floors create warmth and beautify the space. The mouldings, cornices and rose ornaments, which varied in design depending on the apartment’s level of standing and floor, accentuate and highlight the walls and ceilings. The wood panelling on the walls adds the final touch to this exquisitely refined style. 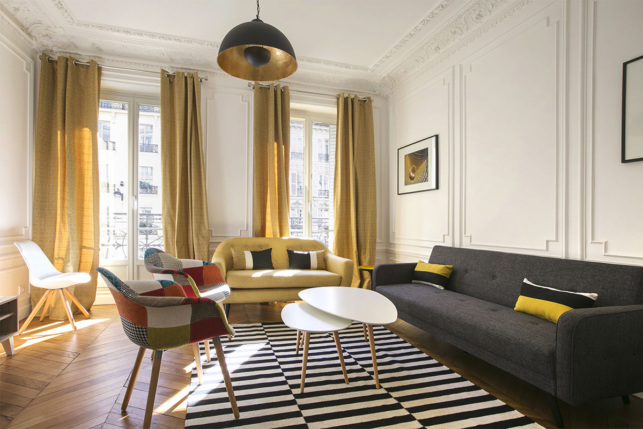 Rooms in Haussmannian apartments are bright, because they typically have large windows – Furnished apartment to rent, Rue de Rennes 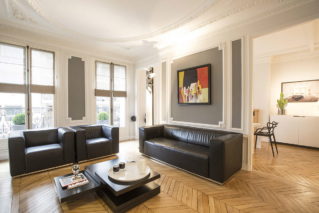 The lighting inside Haussmannian apartments is an important detail, so that the moulding motifs can be fully appreciated, as well as the oval ceiling with cornices, as seen here. Furnished apartment with long balcony, Neuilly-sur-Seine 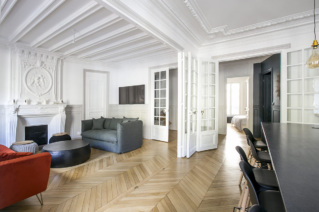 Another example of the spacious rooms in this furnished apartment on Avenue Kléber; the kitchen opens onto the living room 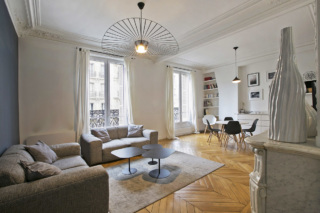 In this furnished two-bedroom apartment on Rue Monge, the space was redesigned to make it more roomy and functional 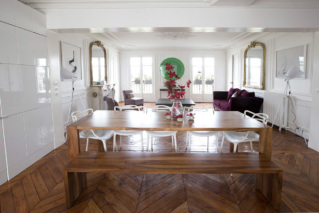 The dining room and living room are an extension of the kitchen. The removal of partition walls is common during the renovation of Haussmannian apartments. A high-end furnished rental on Boulevard Voltaire 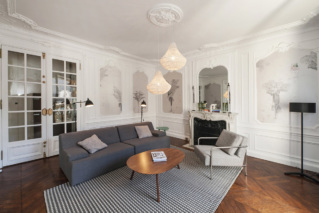 The Haussmannian style, just like Coco Chanel’s little black dress, is a classic easily brought up to date. Apartment for rent with view of the Louvre, Paris 1st arrondissement 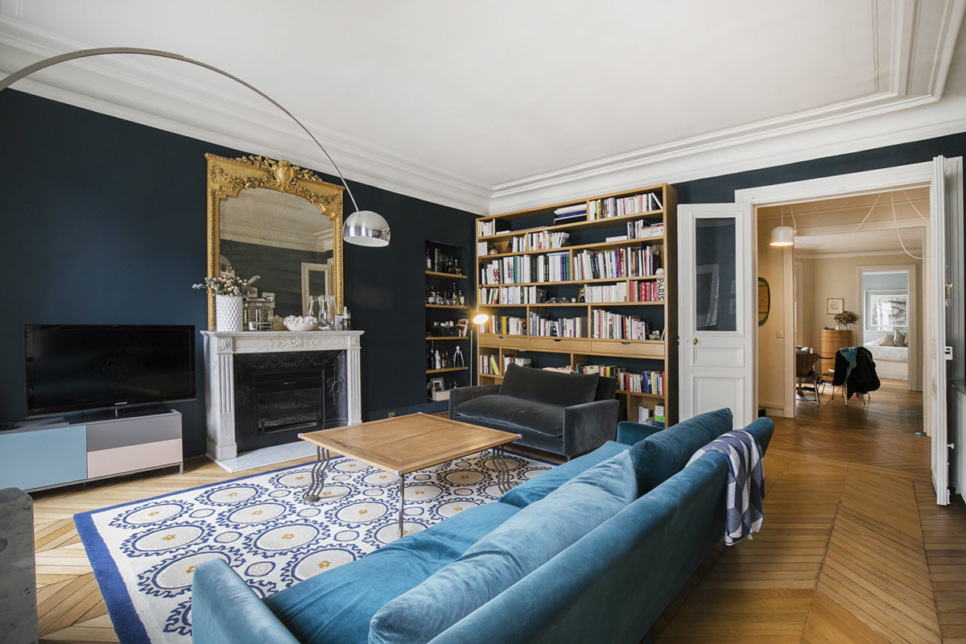 Continually reinvented, the Haussmannian style can be tailored to every wish

To adapt to modern tastes, the room layout can be rearranged into daytime and night-time spaces. The inner space can be redesigned by removing or moving the partition walls. Wooden floors and mouldings are easily restored, and walls painted with bold colours play on contrast. The kitchen comes out from behind the scenes, joining the living room to bring the living spaces together into a single area. Add a walk-in wardrobe or a shower — they’ll work magic. The Haussmannian style is a source of inspiration to the big names in interior design, and sparks ambition in amateur designers. The blend of old and new works wonderfully. The perfect proportions and well-designed balance of the Haussmannian style is a delight to bring up to date with modern trends, once you respect the golden rule: contrast and juxtapose styles, without erasing them or blunting them. 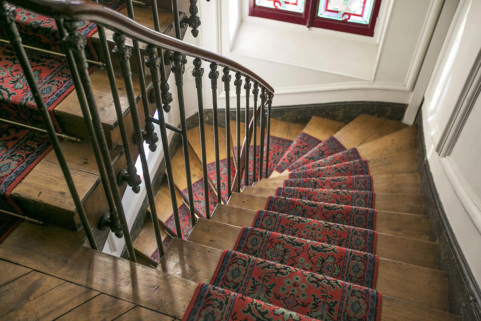 In Haussmannian buildings, a certain social hierarchy is at play. When they were designed, the lower floors were kept for the elite, whereas the upper floors were left to the lower-class families 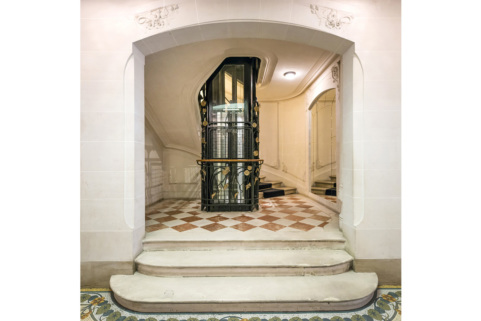 With the invention of the lift, apartments on the upper floors are now very sought-after

When lifts were introduced in the early 20th century, the hierarchy of the floors was reversed. Now, the 5th and 6th floors are the most sought-after. Having an unobstructed view of the rooftops of Paris and a clear horizon are advantages that don’t have a price. 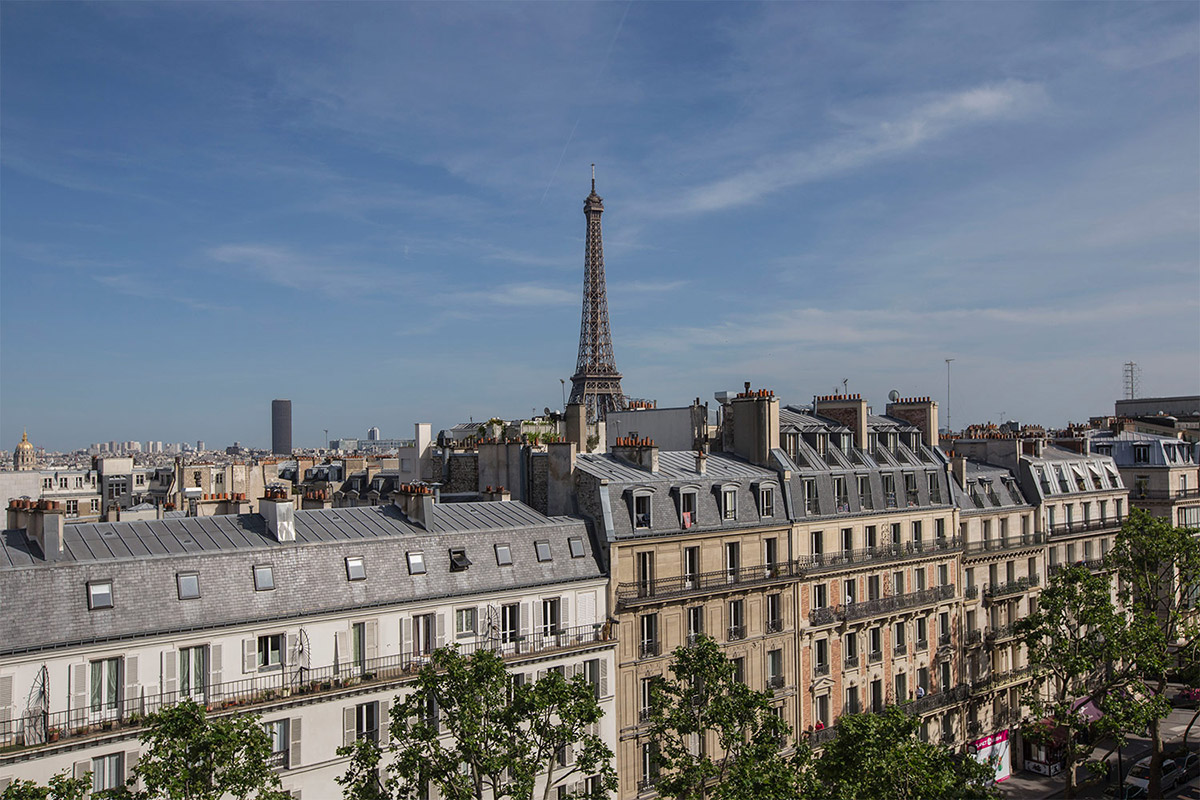